The mighty Mississippi River is the ideal place for P'hurba Thinley Ling, home of the Lama Dawa Memorial Stupa, the Buddha Temple and the P’hurba Peace Mandala because of its unique geomantic properties which serve to enhance and amplify blessings.

The Mississippi River Valley is a major ‘flyway,’ or bird migration route, for 40% of all waterfowl and 60% of bird species in North America. It is home to 306 species of birds, including rare birds such as the canvasback duck and tundra swan, and has hundreds of bald eagle nests. Other birds that make their home here are great blue heron, white egret, hawks, falcons, vultures, wood ducks, trumpeter swans, pelicans, Canadian geese, loons, wild turkey, and a variety of woodpeckers, owls, and songbirds. It is a bird watchers paradise! Birds play a prominent role in Buddhist symbology. Tantric legends speak of the female ‘sky-movers,’ the dakinis, who are often depicted as birds. For example, Tseringma and her sisters appeared to the yogi Milarepa as birds. The presence of certain birds is used to read omens and portents and are often carriers of secret messages.

The main criteria for the P’hurba Peace Mandala was that it be placed near a major body of water. According to the ancient tradition of tantra, water is considered to be a carrier of blessing power. Blessed water is used for many rituals and for healing. When pujas such as Sang Offerings and other practices are done near water, their effectiveness is enhanced. Likewise, when stupas and other monuments are built near water, their blessing power is amplified and carried along the currents to all corners of the earth. Recent research by Masaru Emoto show that the very molecular structure of water is influenced by subtle thought patterns, and water that had been meditated on reflected that purity in its structure.

The Mississippi River is the third longest river in the world, and has the third largest drainage basin in the world, exceeded in size only by the watersheds of the Amazon River and Congo River. It drains 41% of the U.S. through the rivers, creeks, and streams from 31 states and two Canadian provinces. As it pours into the Gulf of Mexico from New Orleans, it creates a channel of fresh water that travels around the peninsula of Florida and up the east coast to Georgia, until it finally dissolves in to the gulfstream. This can be seen from NASA’s MODIS satellite images. It is especially interesting to note that this is the path of some of the deadliest hurricanes. The purifying effects of our Stupa and Mandala along such a powerful river are far-reaching and very concentrated, and the blessing power could be carried into the hurricane zone and eventually spread out over the ocean, ultimately reaching all corners of the earth.

The Upper Mississippi River National Wildlife and Fish Refuge is a 261-mile stretch of the northern section of the river that runs between Iowa, Wisconsin, and Minnesota. Unlike most sections of the river, the Upper Mississippi is a wide valley that is made up of the main river channel, wooded islands, backwater sloughs, and lakes. This 240,000-acre refuge is a sanctuary for fish, birds, crustaceans, plants, and wildlife—many of them endangered. There are 132 kinds of fish in the river and this is where the Fish and Wildlife Service get fish to stock other areas of the US

Saraswati Bhawan’s land is situated within a unique geological region, called the ‘Driftless Area.’ This region—a 24,000 square mile spanning southeastern Minnesota, northeast Iowa, western Wisconsin, and northwest Illinois—was bypassed by the last glacier 12,000 years ago. Therefore, early geologists did not find any glacial ‘drift’ (hence the name ‘driftless’). The land here is approximately 500 million years old (one tenth the age of the earth), and is marked by steep sided ridges, numerous caves, and towering limestone and sandstone cliffs. The region also contains sinkholes and hundreds of streams fed by deep limestone aquifers.

The Midwest Driftless Area is a national treasure. Its distinctive topography, deep caves and springs, and vast number of cold water streams make the region unique. Bypassed by the last glacier, it has been described as, “a fragment of the past, a small piece of what once was.”unique beauty of this area 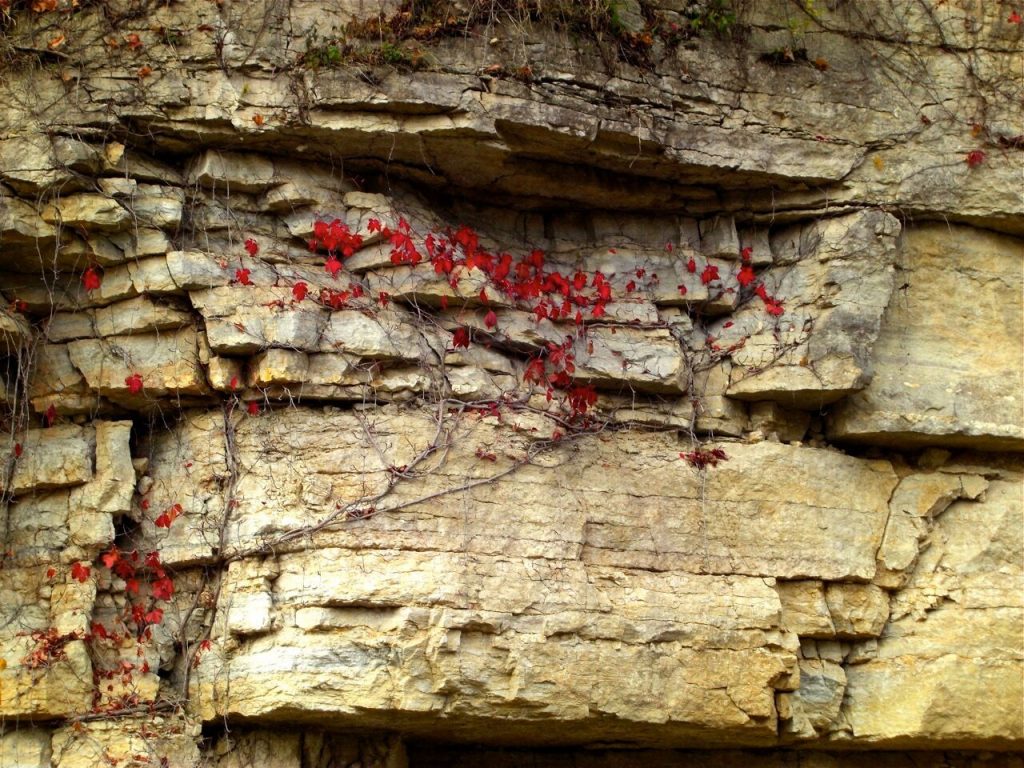 The Driftless Area National Wildlife Refuge preserves a unique habitat known as ‘algific talus slopes,’ – cold producing rocky slopes – which remain cool throughout the year and are home to rare species of plants and animals. The first human inhabitants were nomadic Paleo hunters, who pursued mammoth and caribou 12,000 years ago. Later, it became the home of the Eastern Woodland Indians, who built sacred burial and ceremonial mounds—many in the shapes of animals—2,000 years ago. The remnants of their culture can be seen at Effigy Mounds National Monument, in Harpers Ferry, Iowa. More recently, tribes such as the Saulk, Fox, Kickapoo, Ioway, Dakota, and Ojibwa occupied the hills and valleys of the Driftless Area.

The Effigy Mounds National Monument is an amazing place that preserves what is left of ancient Native American ceremonial and burial sites in the shapes of animals. These 2,000 year old ‘effigy mounds’ were constructed on the bluffs overlooking the vast upper Mississippi River Valley. According to archeologists, this was the only known area where effigy mounds were created (For more information see: www.nps.gov/efmo). Lama Dawa feels very strongly that this area is a ‘power spot,’ and apparently, so did the Native Americans.

Below is a beautiful, short documentary on the ‘Driftless Zone’ area which highlights the unique beauty of this area

A Mandala For World Peace

All of these incredible qualities make this area the perfect place for the P'hurba Peace Mandala. Here, the earth, water, and sky come together to create a beautiful and pristine area for a Mandala for World Peace, which will continue to bring benefit to all beings for generations to come. In addition, it provides a perfect place for group and individual retreats, offering a peaceful sanctuary in harmony with the elements.
P'hurba Peace Mandala Project
Saraswati Bhawan is a non-profit religious organization founded by Acharya Dawa Chhodak Rinpoche. We are dedicated to the practice and preservation of the ancient Buddhist Tantric tradition as held by the Nyingma sect of Tibet. In particular, we focus on the Khandro T’huk-t’hik path of the Dudjom Tersar and the Rigdzin Sogdrub yogic practices of the Northern Treasures lineage.